The truth behind what causes motor insurance premium increases

Can insurance companies really be trusted to deliver the truth when it comes to the information they release to the press? They seem very clever at delivering a constant wave of rhetoric about how premiums are going to increase and that it is all due to whiplash claims, expensive hire cars and accident management companies. But do you realise the insurance industry is largely at the centre of all this?

Some insurers even have an agenda that compensation should be scrapped for injured motorists and that the insurers should just pay for some treatment and then wave you off into the sunset.

The trouble is, a lot of these proposed reforms go almost unchecked by government and regulatory bodies, riding on the back of the wave of support allegedly drummed up from the constant drip feed of almost shaming people who have the nerve to make a claim after somebody else injures them on the roads. The same goes for the alleged epidemic that is "fraud", with the UK supposedly in the grips of a tide of non-stop fraudulent claims being submitted.

Now let's get this straight, there is a problem of some organised gangs and bent accident management companies who pedal either staged or fictitious claims and from time to time, some people do exaggerate the extent of their losses or injuries, but we would ask the insurers to first of all define "fraud".

We have seen anecdotal evidence that some insurers classed any claim they managed to negotiate down by 10% or more as a fraudulent claim. So we submit the extent of fraud is completely exaggerated by insurers. Similar to the police reporting that dwelling house burglaries are down, because on many occasions a burglary won't be crimed as a burglary, no, they will classify it as "criminal damage" instead. So the stats say one thing, the reality is different.

Again, the driving force behind the reasons they scare motorists with increased premiums is to then lobby government for yet more control of the claims industry This all just comes from a desire for greater profits. Nothing will change in the end, the consumer will just have less choice of who represents them and the insurance industry will control all facets of the marketplace.

The major problem that has existed for over a decade is the actual involvement insurers have themselves in the number of personal injury claims that arise, as well as credit hire car claims. This is something that rarely has come to the attention of the press or indeed government.

Before April 2013, insurers enjoyed juicy kickbacks from lawyers for the personal injury cases they referred to them when their own policyholder called to report a non-fault claim. These were called "referral fees". They were banned. So all along, insurers were injecting plenty of claims into the system themselves and reaping the benefits from the kick backs they received.

Admiral Insurance Group (EUI) reported an income £15million from referral fees alone. Lawyers were making moderate costs which had been fixed for a couple of years. However, because the insurers had got a taste of the action at the point claims were reported (captured), suddenly we had a more efficient machine at the front of the queue, making sure all injured occupants in a car were identified and sent in the direction of the panel law firm they had a financial arrangement with.

This resulted in the situation where there were more effective means of getting more people involved in injury claims at an early stage, we had the statistic then trotted out by the insurer lobby that despite the number of road accidents falling each year, the number of injury claims were rising. Rather than looking inwards at the problem, they decided to put the blame on claims management companies.

All of this assisted the insurers in lobbying the government for reforms after the costs of premiums rose by over 40%. Yes, the insurers were causing the problem they were then complaining about. But the insurers were really clever. Not only was reform of the personal injury sector imminent, with solicitors fees being slashed by over 60% and the banning of referral fees, but a change in regulations surrounding external investment in law firms was about to chime in during April 2013 also.

Put bluntly, the insurers had helped to engineer the perfect storm of excrement, all for their own gain. This meant they were able to continue pumping personal injury claims into the system, but now they could send the claims into law firms they either owned or had a profit share arrangement with. This by-passed the forbidden referral fee set up with the use of "Alternative Business Structures" (ABS).

Some insurers and large brokers even have their claims reporting lines directed to call centres within law firms, making sure they are at the front of the queue to get injured customers and their passengers signed up. There has been plenty of "buddying up" between insurers and law firms they now own and this continues to bleed money out of the system and then give the insurers a reason to raise premiums.

One thing is certain, the insurers continue to look outwards for the cause of the problem. A recent article which seems to have done the rounds, almost appearing word for word in a number of different publications, with the exception that one of them put the alleged cost of whiplash at a staggering £472 BILLION, yet the same article, almost word for word seemed to have a corrected figure at £472 million. The blame being put on "criminals, no win no fee lawyers and claims management companies."

The press just can't seem to get enough of it and appear to publish copied & pasted press releases from insurers and their mouthpiece, the ABI.

It is a fact that the number of claims management companies registered with the Ministry Of Justice has declined since the April 2013 reforms and, they continue to decline.There has also been a reduction in the number of whiplash claims made, according to data obtained by the Association of Personal Injury Lawyers (APIL) from the Department of Work & Pensions.

The problem with the level of involvement the insurance industry has with the injection of personal injury and credit hire claims into the system is that they are just cutting each other's throats on a daily basis. When their customer reports a claim that appears to be non-fault, they can't wait to send their customer to a car hire firm to provide a replacement hire car and also to tout and almost pester for injury claims to send to their law firm. This is because they receive revenue from the service providers they refer their customer to.

All of this ends up in the lap of the insurer for the party at fault, who picks up the tab for it. The situation is then reversed for the other insurer when their customer reports such a claim and, the situation is repeated over and over again on a colossal sale.

The system is by no means perfect, but the insurance industry have got to stop taking everyone for fools and continuing with the hard done-by sentiment they keep pushing out there in press-releases. They need to be more transparent with what they are actually upto and stop passing the blame around when they are the biggest cause of the problems they complain about.

www.freemotorlegal.co.uk is a free alternative to buying motor legal protection for all motorists in England, Scotland & Wales. 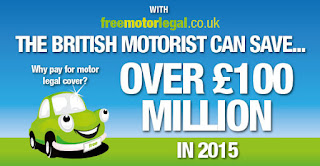